Welcome to The Final Outpost!

The Final Outpost is an adoptable site where the goal is to discover and breed new variations of creatures. Discover new breeds through quests and hunting on the site.

Sign up! »
By viewing this creature, you have leveled up its happiness +2 points. 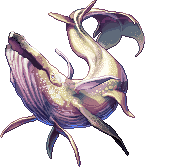 It is a rare occasion to see even a single Nebula Glisanto—let alone an entire herd of seven or eight—in the wild. Despite reaching well over one hundred feet in length, these giant aerial mammals are notoriously hard to spot. They prefer to retreat into the high-altitude climes of secluded mountaintops, where they can remain undisturbed and hidden from sight. The dense, massive clouds that they periodically expel from their blowholes provide a handy source of camouflage; from a distance, a Nebula Glisanto is nearly impossible to distinguish from the cloud cover that often surrounds it. Herds are tight-knit family units that spend much of their time high above ground, only dipping down closer to sea level for certain months out of the year to filter-feed on insects and even small birds during their respective migratory seasons. While further research must be conducted to fully explain the Nebula Glisanto’s ability to remain afloat at such high altitudes, it is hypothesized that they possess a large bladder alongside their lungs that is filled with an extremely light gaseous compound.

The creatures that dwell in this rather desolate world still display some diversity in appearance, eating habits, and social behavior. Whether they have fur or feathers, skin or scales, their unique genetic makeup allows for a variety of colors and markings within each species. Despite limitations in food sources, herbivores, omnivores, and carnivores are all present in the food chain, and each species requires specialized care within a laboratory. Although the artificial setting of housing units and breeding pods precludes most opportunities to study true interspecific behavior, the interactions within and between species has been studied extensively in the wilderness by scientists daring enough to venture beyond the outpost’s walls.